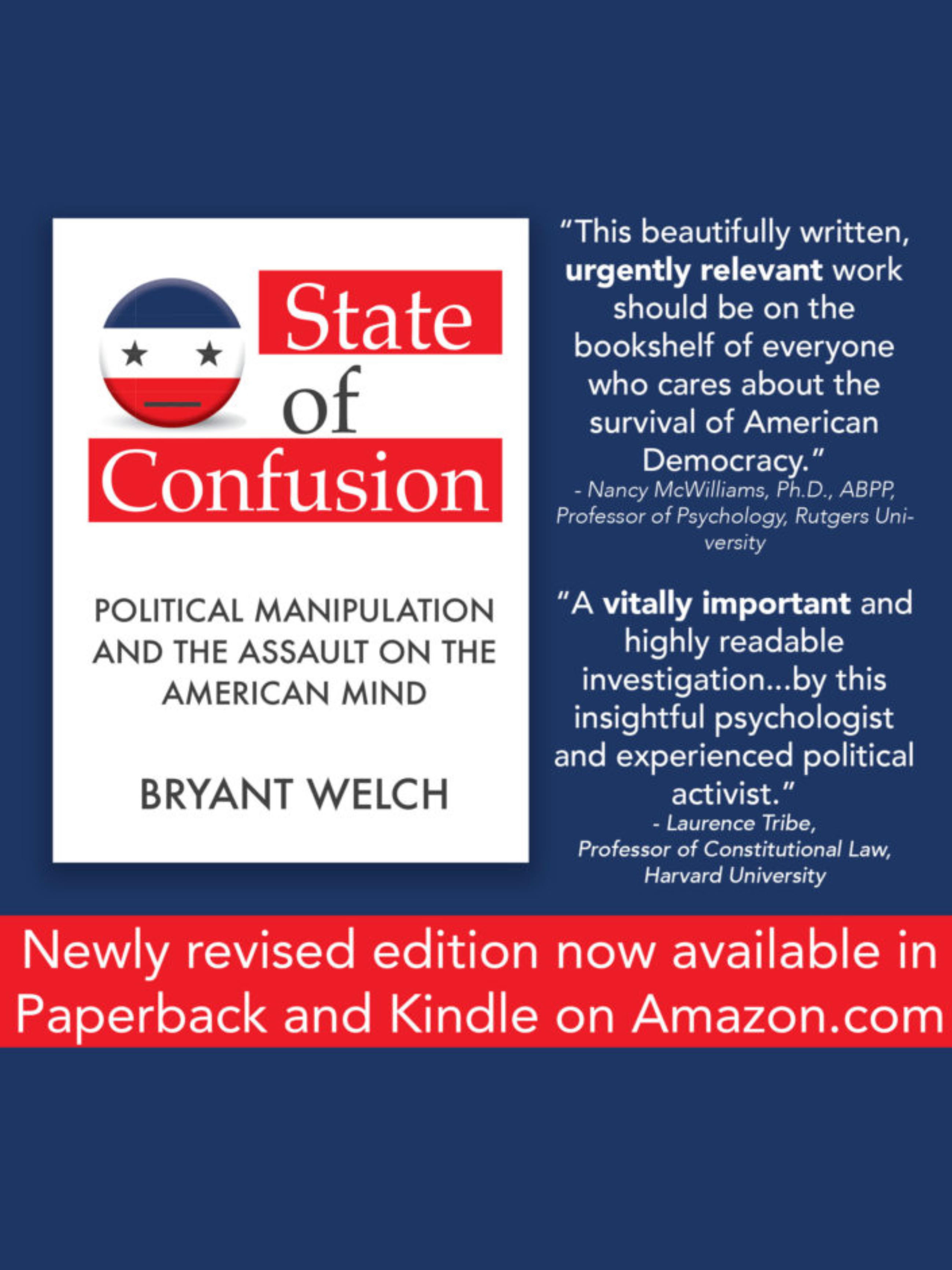 Our Political World Has Never Been More Confusing. What's Gone Wrong With the American Mind? How Did We Get so Divided?

In Bryant Welch’s critically-acclaimed book “State of Confusion,” he provides a comprehensive explanation of what has gone wrong with the American Mind that is making millions of Americans engage in such strange behavior disregarding logic, common sense, and self-interest.  He also explains what American can do to begin to reverse the pernicious psychological forces at play before America descends into a crazed and autocratic state.

State of Confusion: Political Manipulation and the Assault on the American Mind

Perhaps you’ve wondered, why are Americans so vulnerable to divisive political tactics? Why do fundamentalist religious groups, Fox News, and right-wing radio still play such influential roles in America’s political landscape? And why are long-accepted rational scientific ideas like evolution under siege?

If America is going to change the mind-set that has left us unable to confront our serious national problems, this book is vitally important. Drawing on his unique experience both as a clinical psychologist and a Washington, D.C., political figure with the American Psychological Association, Dr. Welch shows how the long-term effects of sophisticated new forms of political manipulation have not only led to our debacle in Iraq but are also currently undercutting America’s ability to address its very serious problems. In the 1944 movie Gaslight, a husband drives his wife to the brink of insanity by playing games with her sense of reality. Just as in the movie, America’s most recent political “gaslighters,” such as George W. Bush, Karl Rove, Rush Limbaugh, Ann Coulter, and many religious leaders, have generated and exploited confusion in the minds of countless Americans.

Gaslighters prey on their victim’s vulnerability to paranoia, sexual perplexity, and envy to undermine the mind’s ability to function rationally. Welch examines why millions of Americans, in response to such assaults, subconsciously and dangerously create their own simplistic reality, even if it is completely different from the more complex reality of the world.

Bryant Welch was born to write this vitally important and highly readable investigation of how a cadre of ethically challenged political operatives and their religious and journalistic allies have gradually distorted and disabled the minds of ordinary Americans—and have all but crippled the once-extraordinary mind of America. It is not too late for us to reclaim our identity, but we will succeed only if we take to heart the lessons so lucidly laid bare by the remarkable work of this insightful psychologist and experienced political activist.

Most importantly, State of Confusion explains how and why Americans must act now to fight back against this harmful manipulation before it’s too late. Dr. Welch’s exploration of the American mind is both fascinating and frightening, and State of Confusion is a must-read for everyone who cares about the future of this great country.

Praise for State of Confusion

"This is one of those few books that is a virtual Rosetta stone to understanding how so many Americans are living in an alternative reality."

"Bryant Welch makes a fascinating and compelling case that right-wing politics has subverted our democracy by infecting us with a form of national political neurosis. This book unmasks the politics of fear—the deeper chords touched by campaigns that appeal to the dark side."

- Robert Shrum, senior strategist of the Gore and Kerry presidential campaigns and author of No Excuses: Concessions of a Serial Campaigner

"State of Confusion is intense, clear, logical, and striking in its message. It will grab you emotionally and intellectually…the message cannot be missed….Bryant Welch sees through the smoke and mirrors and offers the only remedy that will place democracy firmly in the grip of the people from whom it is being stolen: the truth."

"Dr. Welch is a master of making complex psychological concepts understandable and using them to explain the disturbing political climate of our time. This beautifully written, urgently relevant work should be on the bookshelf of everyone who cares about the survival of American democracy."

- Nancy McWilliams, Ph.D.,former president of the Division of Psychoanalysis (39) of the American Psychological Association and author of Psychoanalytic Diagnosis (1994; rev. ed. 2011) and professor, Rutgers Graduate School of Applied and Professional Psychology.

"[State of Confusion] is a unique and successful effort to understand the machinations of politicians and others who have significant influence on others.…With professional credentials in both law and psychology, Dr. Bryant Welch is ideally suited to raise the issues…fascinating reading."